Today it finally happened. Lame duck presidencies can do wonders for progress. And it was sure time for this move. Re-establishing diplomatic relations with Cuba is just the start. But it’s huge. Removing Cuba from the “States of Terror” list will be even bigger (remember that Nelson Mandela was listed as a terrorist by the US well into this century).

It’s time we grew up a little bit as a nation. It’s time that we erase one more piece of hypocrisy from our ideals- as in, China? oh we watch ’em, but we love ’em. This 50 year embargo of Cuba, while initially perhaps a sound strategy, became so obviously political as to be embarrassing. I mean seriously, Canadians travel there en masse.

But politicians had votes to secure in battle-ground Florida, and as 70% of Cuban-Americans live there, politicians cow-towed to them. But I get it. Most of those folks do not take kindly to diplomatic relations with the current Cuban government. They or their families were likely forced from their homes and lives in Cuba when the “26th of July Movement” overthrew our friendly neighborhood puppet-dictator Fulgencio Batista and took control in 1959. Property and wealth was confiscated and many were lucky to flee with their lives.

But sad to say, that happens around the world all too regularly, and we do not respond with 50 year embargoes. And this particular embargo failed, period. Thank you to President Obama for moving forward.

So forward we go. There are “regular-Joe” victories for many. My BOTLs (Brothers of the Leaf), cigar aficionados look forward to easier access to Cuban cigars- not like we weren’t getting them already. Travel restrictions will undoubtedly loosen. As a “Che Guevara” researcher I look forward to traveling there myself. In the long run, the student exchange, cultural exchange, artists touring, academics engaging will result in benefits for all. By osmosis we will rub off on each other. Just like the Cold War when our irrational fear of Russians promoted hate and vilification, and we came to find out that Russian people have the same concerns and life goals as we do. Politics be damned.

If anyone thinks Capitalism or Communism are perfect, they are living in the fog of rhetoric and hyperbole. No system has proven itself to be perfect, or even lasting. In today’s light-speed world, engaging with others is the only way we are going to work things out.

Do I have concerns? Heck yes. This agreement between Cuba and the USA isn’t some panacea. But it is a rational step to eliminate what did not work at all, and replace it with a policy that fits today’s world. I am of course wary of the collateral issues which will come up soon. Those include backlash from neo-cons who drive fear and stagnation to gain votes (Marco Rubio), and Wall Street which will lick it’s chops imagining profit. National corporations who seek to reinvigorate the touristy Havana of the past by catering to wealthy American tourists at the expense of cheap labor. There are a lot of people who see this strictly in terms of nefarious “opportunity”. To them I wish failure.

The bottom line for me is Human Rights. Those ideals which we in the USA want to believe we represent and promote (but don’t turn on the light in the closet- untold skeletons are there). But again, this is a start. I love Cuba for its tenacity. I love Cubans for their pride, for their contributions to global health and welfare. Cuba has ideals! Believe it. This Cuba was founded on principles of equality and social welfare. Did they swing and miss? Sure, in many ways. LGBT rights is but one area of significant concern. But how sterling is our record in the USA when it comes to minority rights, as well as available healthcare for all?

I will go out on a limb here. I contend, albeit provocatively, that if Ernesto “Che” Guevara were still alive and had stayed in Cuba as statesman and national icon, he would have evolved considerably. Che hated the USA because of what he saw in Latin America. Corporate greed, abuse of indigenous peoples, destruction of resources and cultures, etc. That was his beef. He wasn’t a religious fanatic. He wasn’t a terrorist. He was a man of the people. He also looked up to Fidel and Raul Castro, and respected their ideals and disdain for the American-back dictators who disallowed sovereign destiny in favor of corrupt involvement. As they “softened” he would also. But undoudtedy he walked his talk, without concern for his own benefit whatsoever. He was willing to die for his ideals. And he did. 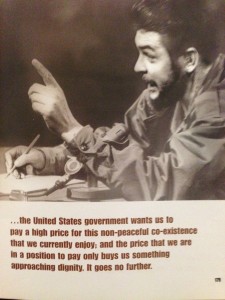 I believe that Che himself would have eventually understood that there are gray areas. There was room for diplomatic agreements. There was room for trust. There is evidence of that when he met secretly on more than one occasion with representatives of President Kennedy, exchanging dialogue toward mutually respected coexistence between nations. It could be said that external forces put the pressure on Cuba to pursue a relationship with the Soviet Union.

Yes, Che was a socialist (a filthy word in our culture). But socialism is not necessarily communism. We have socialist programs in the USA, but most won’t concede that.

I could go on…and of course I will in other posts, but today is a day to relish. A day to when it’s okay to get a little choked-up in the emotional realization that we might make new friends. That the family of humanity might have some hope.

In the last few days, we signed a climate agreement with China and a diplomatic agreement with Cuba. There’s a hell of a long way to go, but dammit we have to start somewhere.

*** addendum: while POTUS can establish diplomatic relations, only congress can lift the actual embargo, so stay tuned.